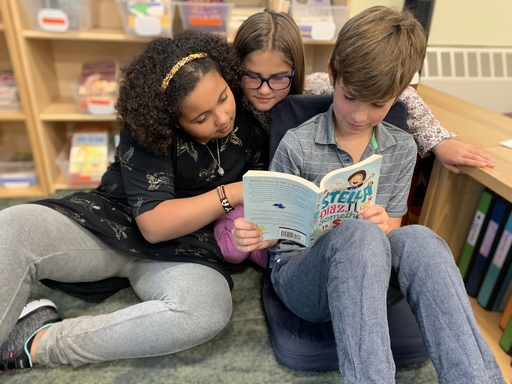 For the second year in a row, grades 2-5 participated in the Global Read Aloud alongside 4 million other children in classrooms in all 50 United States and countries across the world! This year, we read the Early Chapter Book Stella Diaz Has Something To Say by Angela Dominguez, which tells the story of a girl struggling to find self-confidence and be proud of her identity. Stella was born in Mexico City but her family moved to Chicago when she was a baby. Stuck between two languages and cultures, Stella feels like she doesn't fit in anywhere. Meanwhile, Stella is teased at school because of her shyness and her still-developing English skills. Throughout the book, Stella learns to be proud of her heritage and her cultural identity. She also finds her voice and learns to stand up for herself at school!

During the Global Read Aloud, students gathered twice a week to read several chapters of the book. We paused frequently to discuss what was happening in the story and students drew on their diverse background knowledge and personal experiences to make connections to the text. Rectory also participated in a postcard exchange with schools in other states around the country. Each child wrote a postcard to one of the classrooms reflecting about the story and what they learned. We are just starting to receive postcards back from all around the globe! The children are so excited to see who will write back to them and where they are from... Stay tuned!